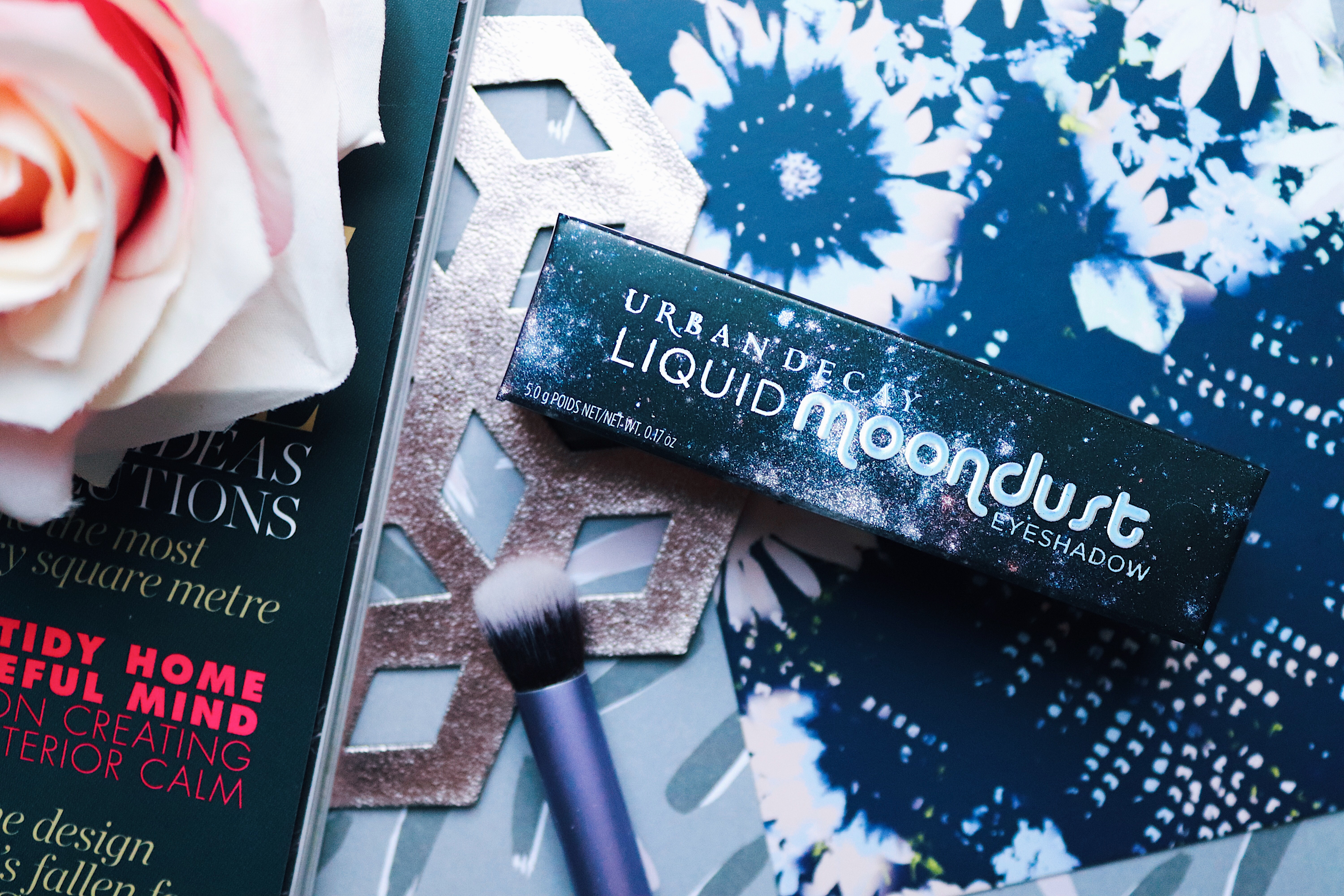 I hope you’re all doing well! I’m currently drowning in work for my dissertation so I won’t be posting as regularly as I’d like to but please bare with me whilst I try and get my life together! Final year seems to be a bit like a circus act – keep all of the plates spinning at once and you’ll be fine. Let one drop and you’ll be missing lectures to catch up on lectures! I just need to keep spinning for a bit longer and it’ll all be worth it (I hope).

I have another review for you today and this time it’s looking at one of Urban Decay’s Liquid Moondust Eyeshadows in the shade “Chem Trail”. They had a sale just after Christmas and I snapped this up as soon as I saw it! I’m always attracted to anything glittery, shimmery and sparkly so as you can imagine it was only a matter of seconds before we reached the checkout together. I hadn’t heard much about them and I couldn’t figure out if that was because they weren’t great or because they were the underrated dark horse that we hadn’t discovered yet. So, let’s find out.

The Liquid Moondust eyeshadows retail at £15.50 each, which I think is a bit much. I think £10 would be a more reasonable price for the 5g of product that we get. The packaging is really pretty. I love the cosmic theme and the way that it catches the light at certain angles. Urban Decay have always done their branding and their packaging right – despite taking the mickey with prices most of the time. When you open up the pretty little box, you’ll find something that looks like Tinker Bell created it herself. I love that you can see the product through the clear tube and the way that the silver font adds some more sparkle.

It’s a no from me. Eyeshadow brushes are ideally meant to be soft and big enough to spread product quickly. This is tiny, stiff and just awkward to use. It’s more of an eyeliner brush which isn’t what it’s sold as so I’m a bit confused as to why they went for this design. Am I just being weird about it? Let me know in the comments what you think.

The formula isn’t chunky thank god. There’s nothing worse than attempting to blend and instead you’re just dragging huge clumps of glitter around. It dries quite quickly too and it didn’t budge until I removed it with a makeup wipe. I would have preferred it to be be more pigmented though, as when I blended it out, it practically disappeared into a very subtle shimmer. When I say blending, it was a bit of a nightmare with that brush…

So, what’s the verdict?

In terms of what I don’t like… If you’re looking for something that makes people stop and ask “what eyeshadow are you wearing?”, I don’t think this is the one for you. However, if you’re looking for a sheer and barely there shimmer on your lids, I’m sure that you will love this product. I might sound really harsh, but for me, this eyeshadow just doesn’t compare to some of the others that I own. If the formula was a little more like the Makeup Revolution Eye Glisten range, I would be buying every shade available! Most of the time when it comes to glitter, I like to go all out, like a glitter ball (don’t judge me) but this is much more…subtle.

That being said, it’s still extremely pretty once it’s blended out and you’ll be looking like Edward Cullen in no time – by that I mean the shimmering, not the fake six pack or the yellow eyes. It’s probably not going to be your night on the town ally but more your summer sidekick. It’s perfect for those days where you quickly need to slap something on sharpish but still look like you’ve made an effort. If you want to go for that “no makeup” makeup look, it would look stunning all over the lids when fully blended out. It’s also exactly what you need when you want to add a touch of sparkle along the lash line, in fact, it’s almost like it was intended for that to be it’s primary use.

If any improvements were to be made, hands down, I’d want a doe-foot applicator, just to make application (shock) a bit easier. I don’t want to faff around with whatever that thing is when I’m trying to get my eye makeup done. I need something that can blend! I think the formula could do with being much more pigmented and less watery. Annoyingly, if you don’t use the product for a while, it separates and all you’ll get is a glittery puddle on your face. Not a fan of that – none of my other liquid eyeshadows do this so that’s a bit of a let down. However, I do really like the way that the shadow works as a subtle shimmer on the eyes. Come to think of it, it could even blend out to be a shimmery highlight on the cheekbones. I’m definitely going to have a play with it and see how I can make it work for me.

Have you tried Urban Decay’s Liquid Moondust Eyeshadows? What do you think? Let me know in the comments!