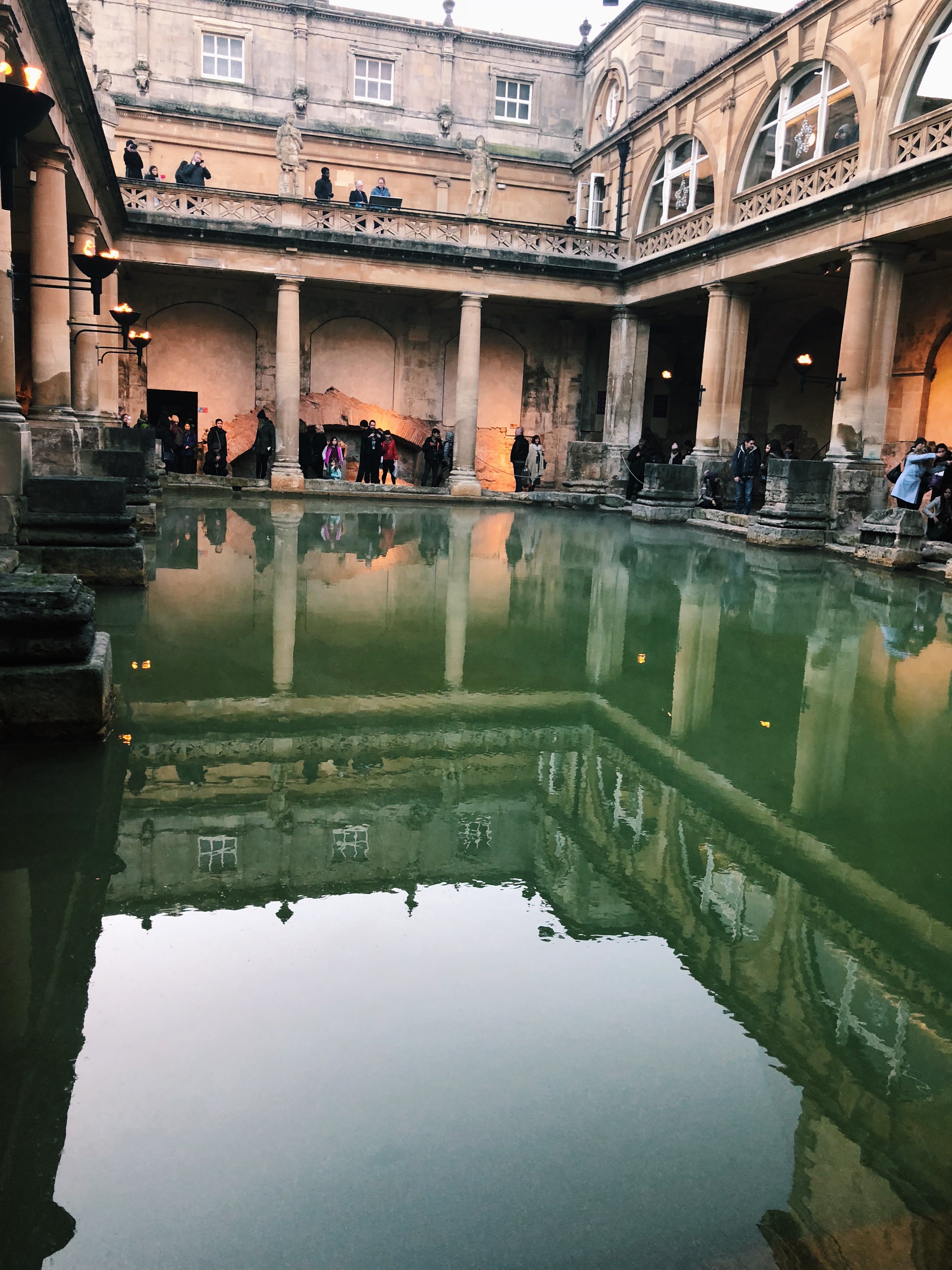 Hello! I hope you all had a fab Christmas – I definitely ate my fair share (and more) of Twiglets and pigs in blankets! I also managed to win a game of Pointless with my apparently extensive knowledge on the different types of potato (feel free to clap).

This year, my boyfriend and I decided to give each other city breaks for Christmas! I took him to Edinburgh and he took me to Bath. I wrote a post about our trip to Edinburgh so take a look if ya fancy! I’ve been to Bath before, with my mum and dad when I was younger for a day trip and I remember loving it. It was so lively and full of shops and things to do. 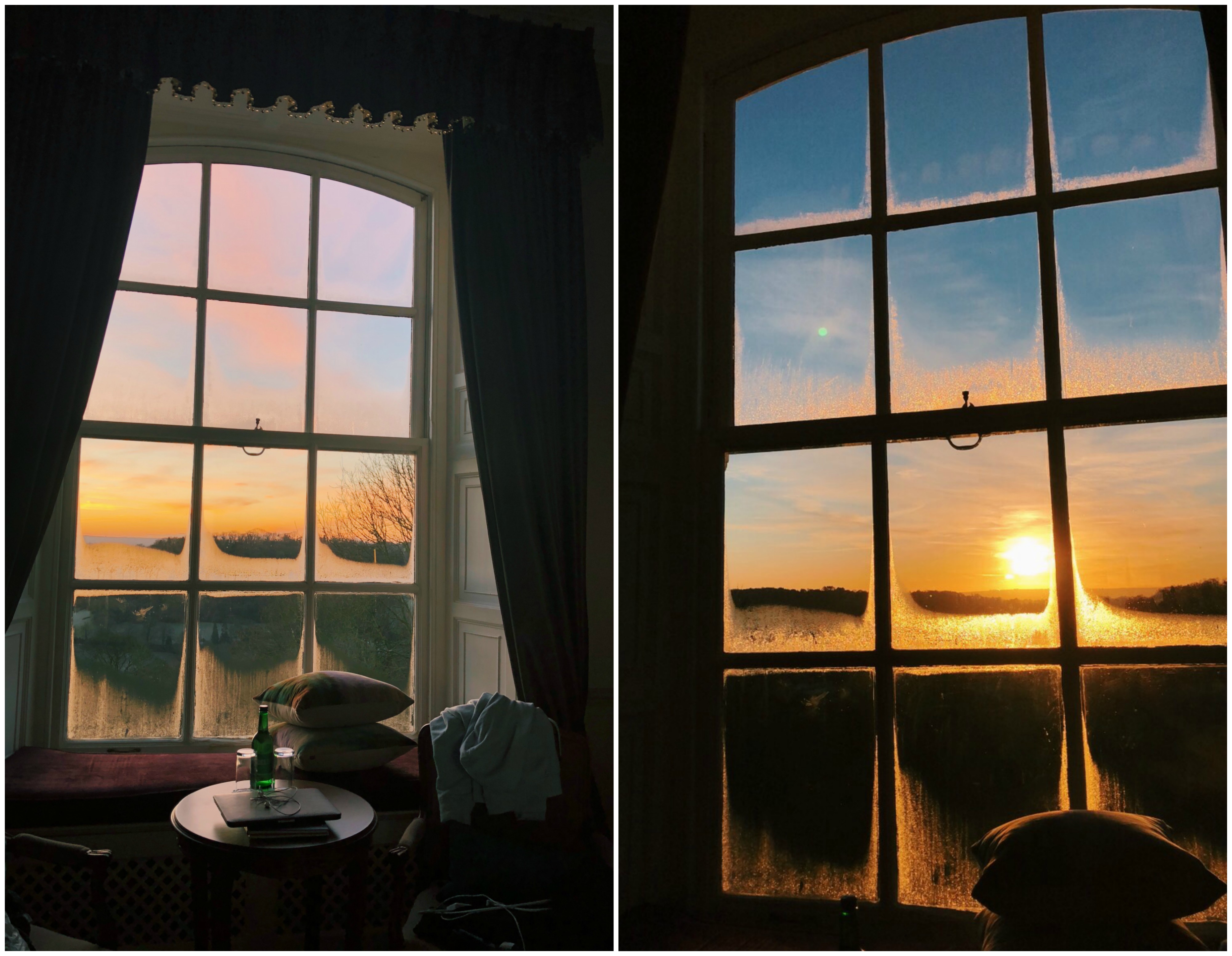 The hotel, Combe Grove, is a beautiful 18th Century Manor House on a hilltop on the outskirts of Bath, away from the busy city life below. At first we wondered where on earth these tiny winding roads were leading us but then the hotel emerged and we were gobsmacked. It had a slight Downton Abbey feel to it with it’s endless amount of gardens and grand country manor aesthetic. I’ve always loved Georgian architecture, especially when it’s later been transformed into a hotel or a living space, as the history behind it is still there.  We were warmly greeted and immediately offered a WiFi code (free of charge – yay!) and shown to our room. My boyfriend had booked a front facing room in the Manor House itself, as they were described to have breath-taking views. When we walked in I was stunned, the bedroom was gorgeous. The window caught my eye in particular – it was absolutely massive! The views from the hotel were incredible, especially the one from our bedroom in the morning! 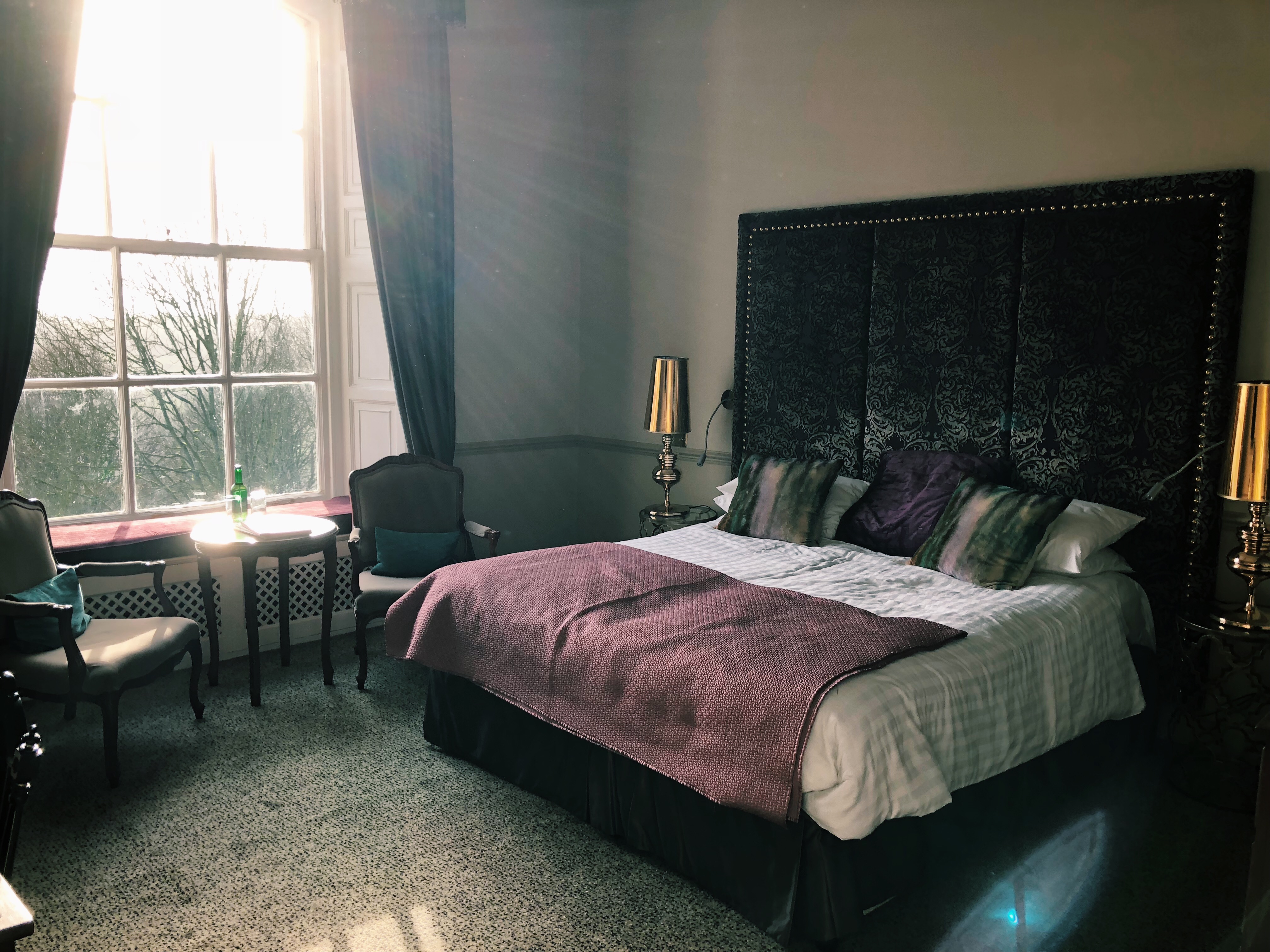 There’s something special about staying somewhere old and full of character that makes a weekend away so much more enjoyable. We looked forward to getting back in for a nice glass of wine in the bar downstairs, before having a nice relaxing bath and sinking into our lovely luxury sized bed (do excuse how badly placed the throw is, that gap is really bugging me). 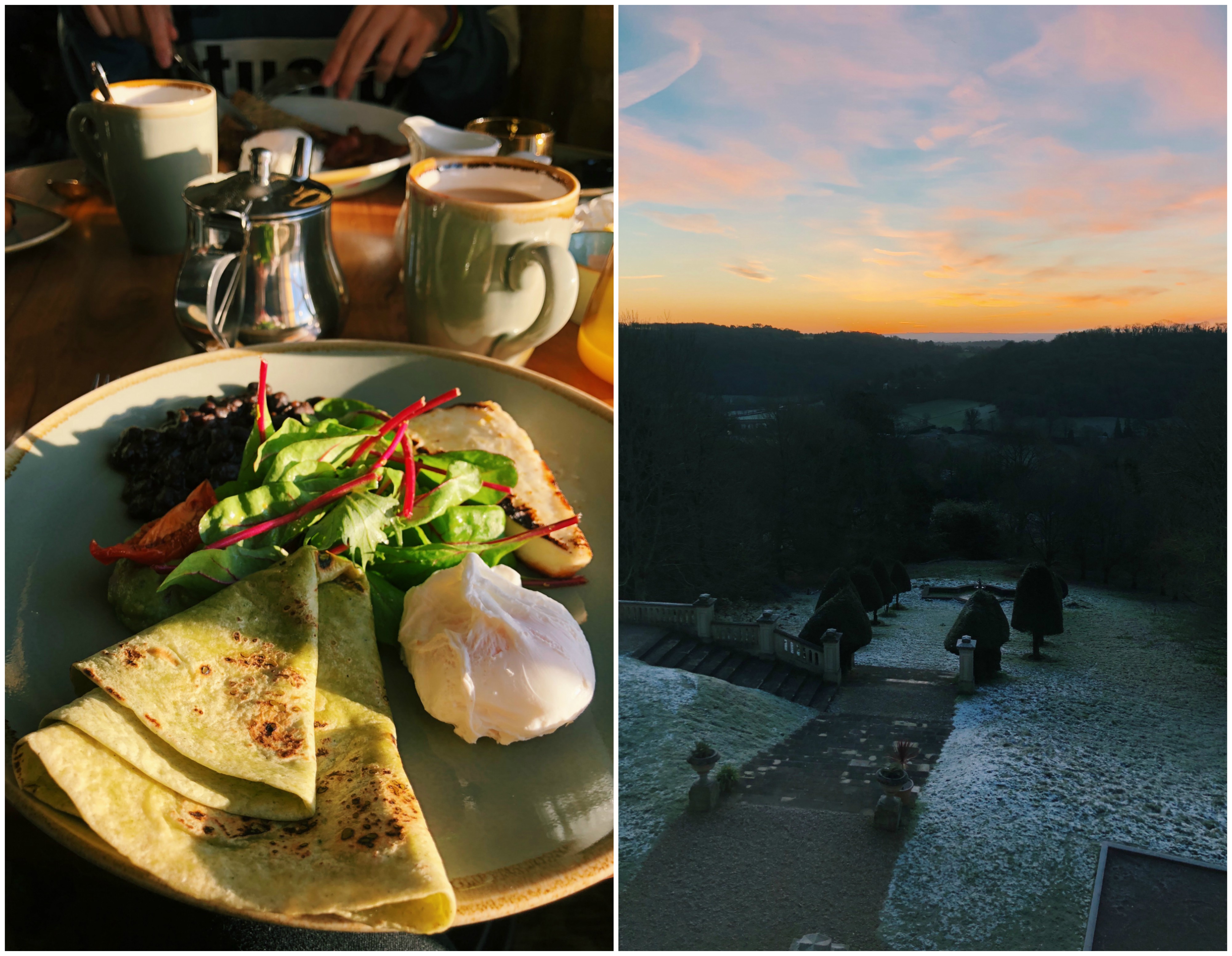 Breakfast was incredible. I chose the Homewood Halloumi served on a spinach flatbread with black beans, avocado and a perfect poached egg. It was SO good, I could eat this all day every day. I’ll almost always order anything with avocado involved. There was also a breakfast table with a plate of fresh fruit, granola, yoghurt, toasted breads, croissants and a fabulous array of fruit juices and jams. We also had the loveliest view of the grounds whilst we ate. 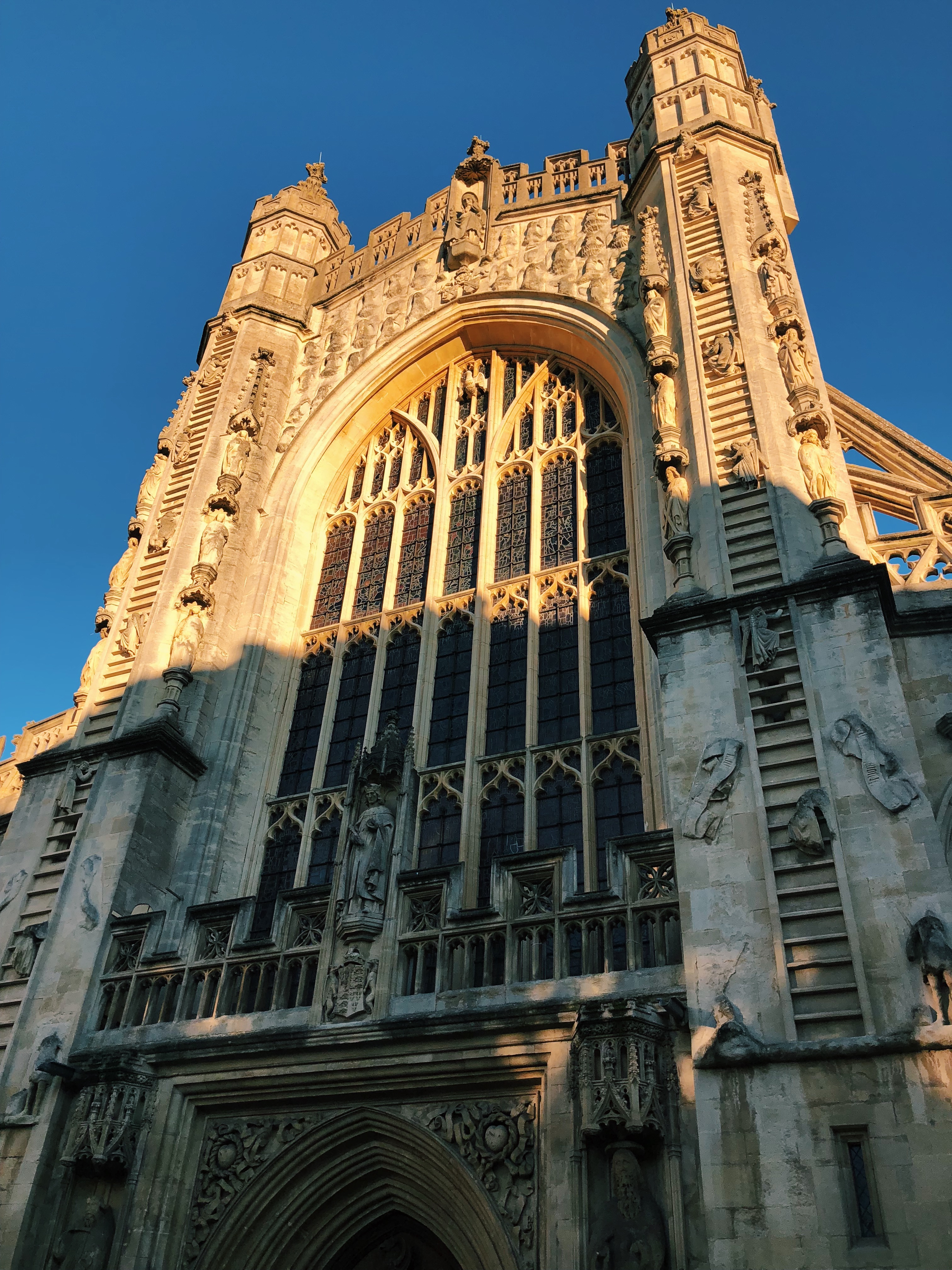 Although I did a fair amount of shopping in the sales (many blog posts are to come as a result) however we did get some time to take a look around the historical parts of Bath. The abbey looked so beautiful in the sunshine, even if it has been standing since 1499! I remember visiting the abbey as a little girl with my dad, and we went into listen to a choir rehearsal and as a result got the chance to meet Sir Willard White!

We decided it wouldn’t be a trip to Bath without visiting The Roman Baths. We originally wanted to go in the morning, but there had been a very long queue so we had to keep coming back and eventually there was only a small group in line! We practically sprinted and we were in the building within five minutes! The standard adult ticket would’ve cost us £15.50 each but as we’re students, we only had to pay £13.75 each. We were offered free audioguides (one by Bill Bryson was available?!) but we decided to just read the signs as we went along. 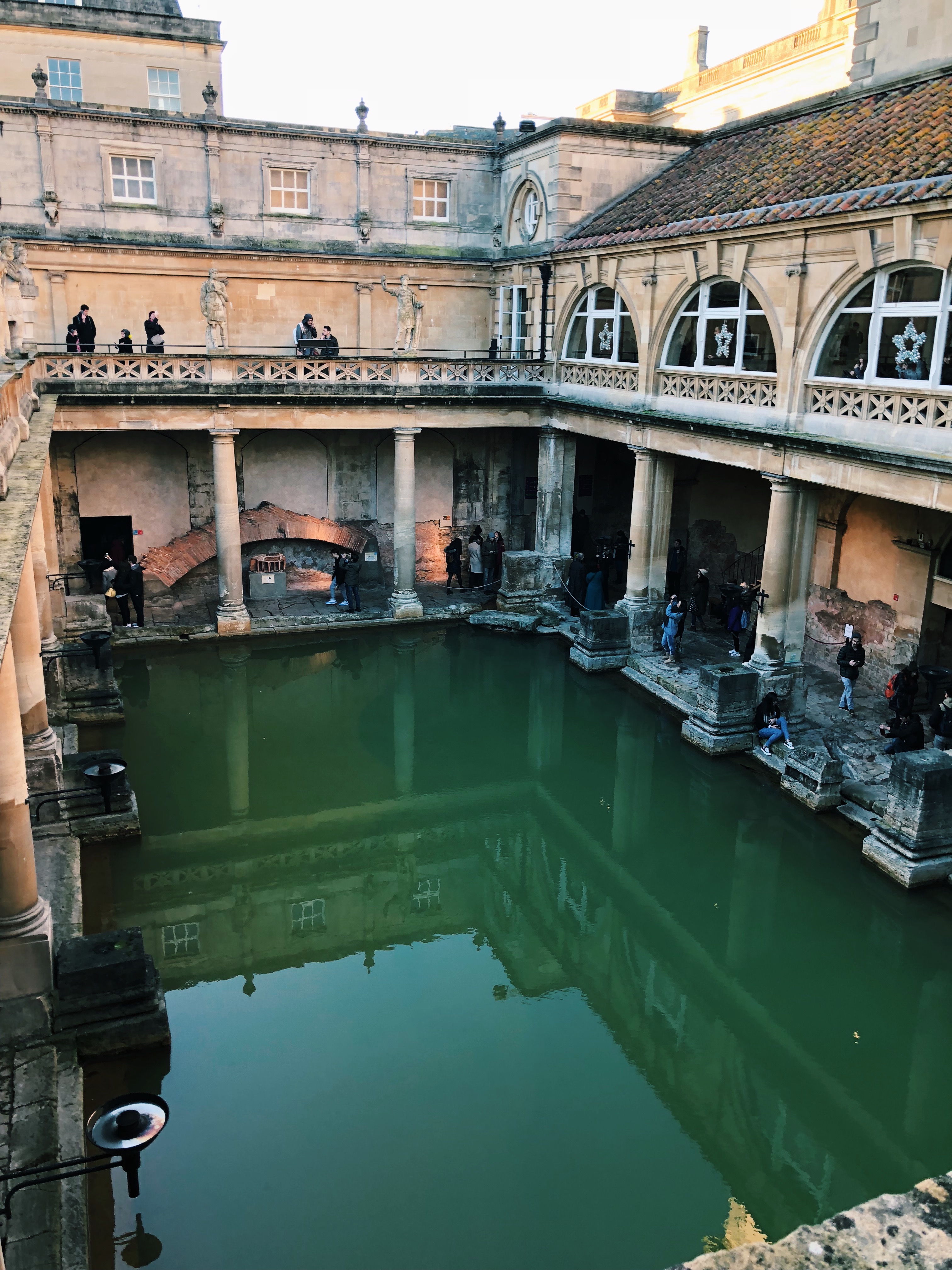 The first view we had of the baths was from the Terrace. There were Victorian statues of Roman Emperors lining the Terrace, dating back to 1894 and were designed for the opening of the Roman Baths in 1897. Below, was the Great Bath and although huge, apparently it makes up less than a quarter of the entire site. It was lovely to be out in the fresh air and also still able to view this fantastic historical site (from above). 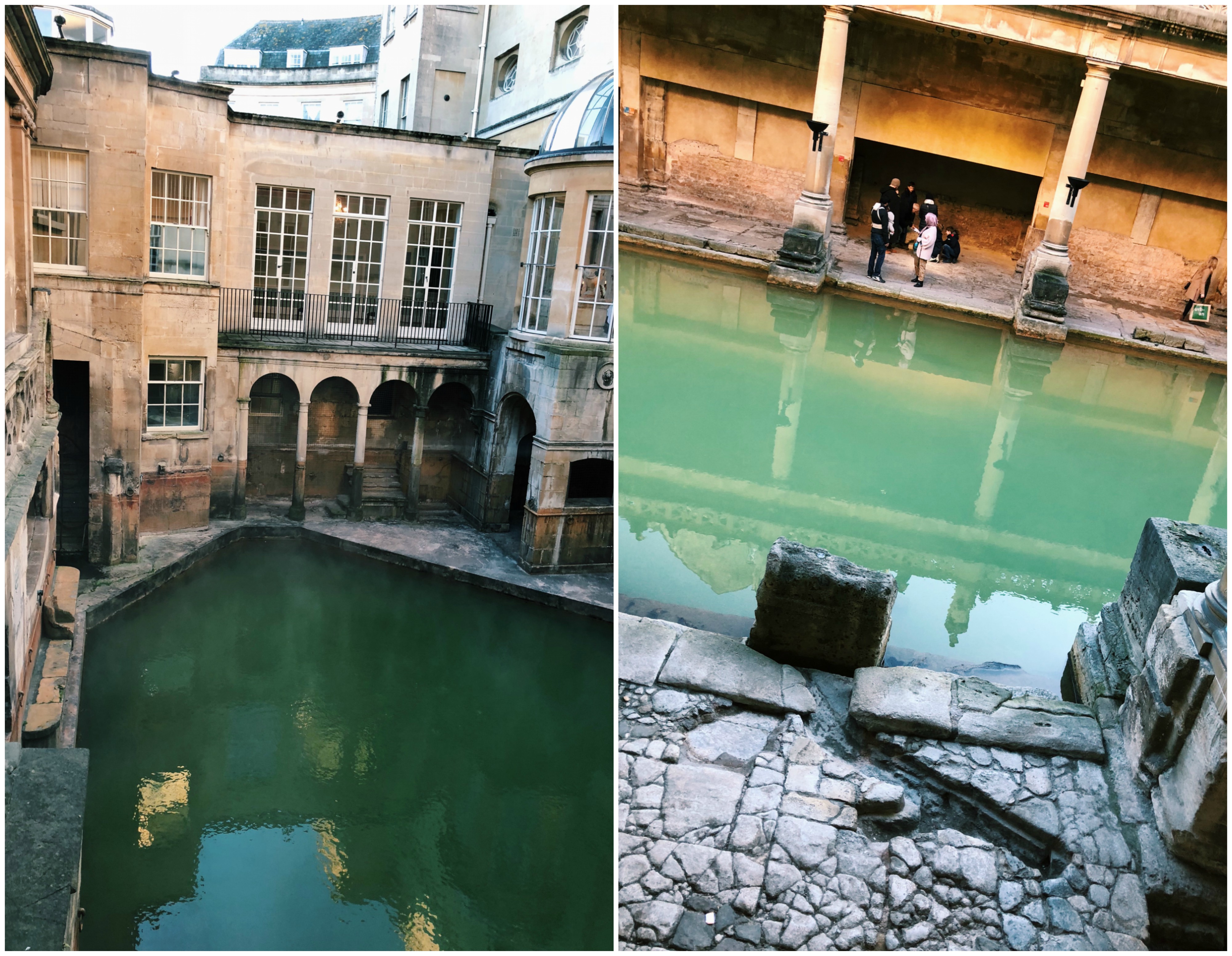 Then, we looked at The Sacred Spring, at the very centre of the Roman Baths site. For thousands of years, the naturally hot water (46°C) has been rising there every day! (If you’re wondering why on earth I have applied a weird fuzzy filter over my photos, it’s actually just the steam rising from the water). It was once believed that the ancient gods were responsible for this. Many also believed that this water had healing powers and some would travel for miles and miles just to drink it or bathe here! 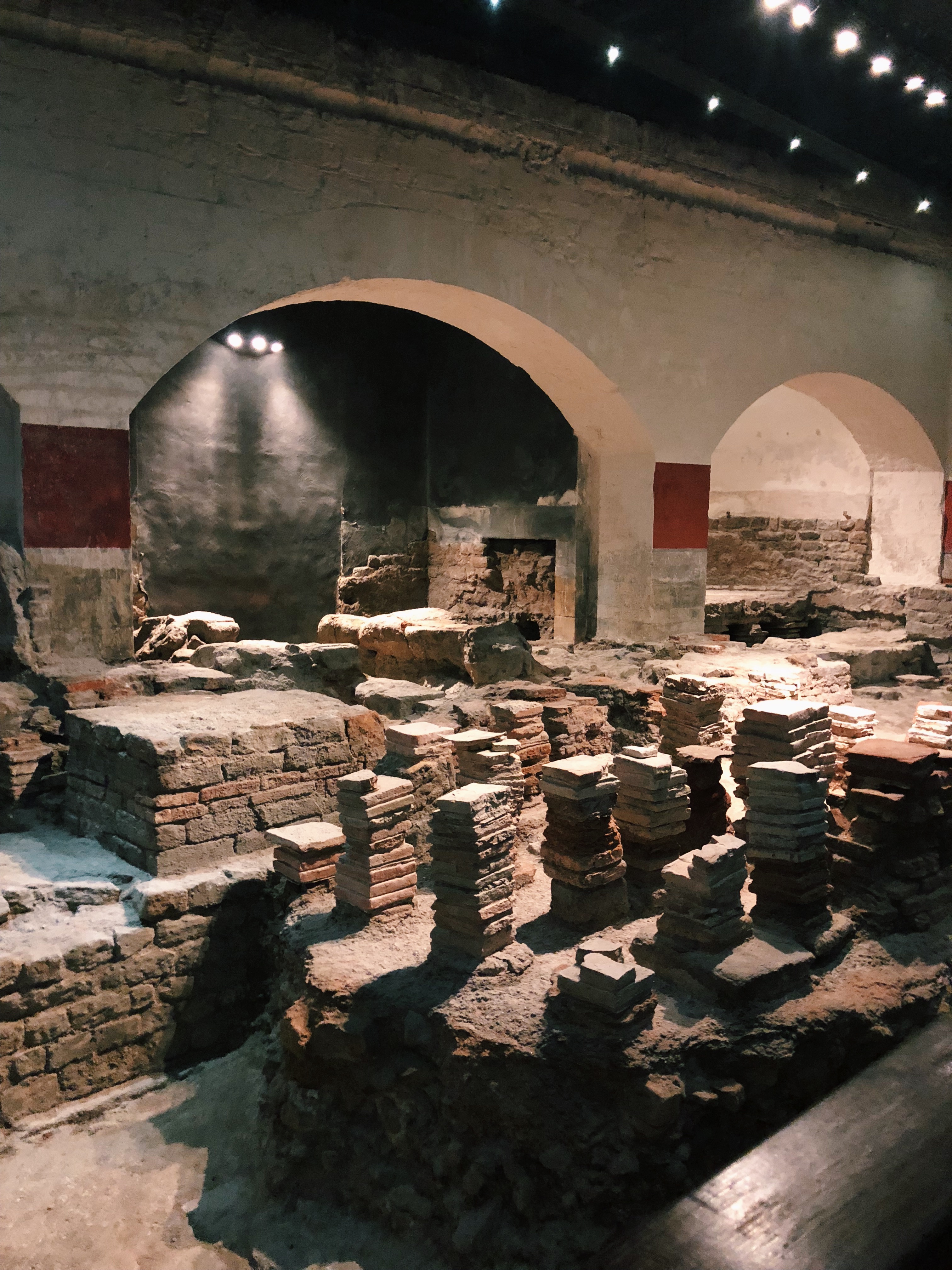 Part of the East Baths, this would have been a hot room for people clean up before using the baths (pretty much like modern day spas now) where they could receive massages or sit in saunas. 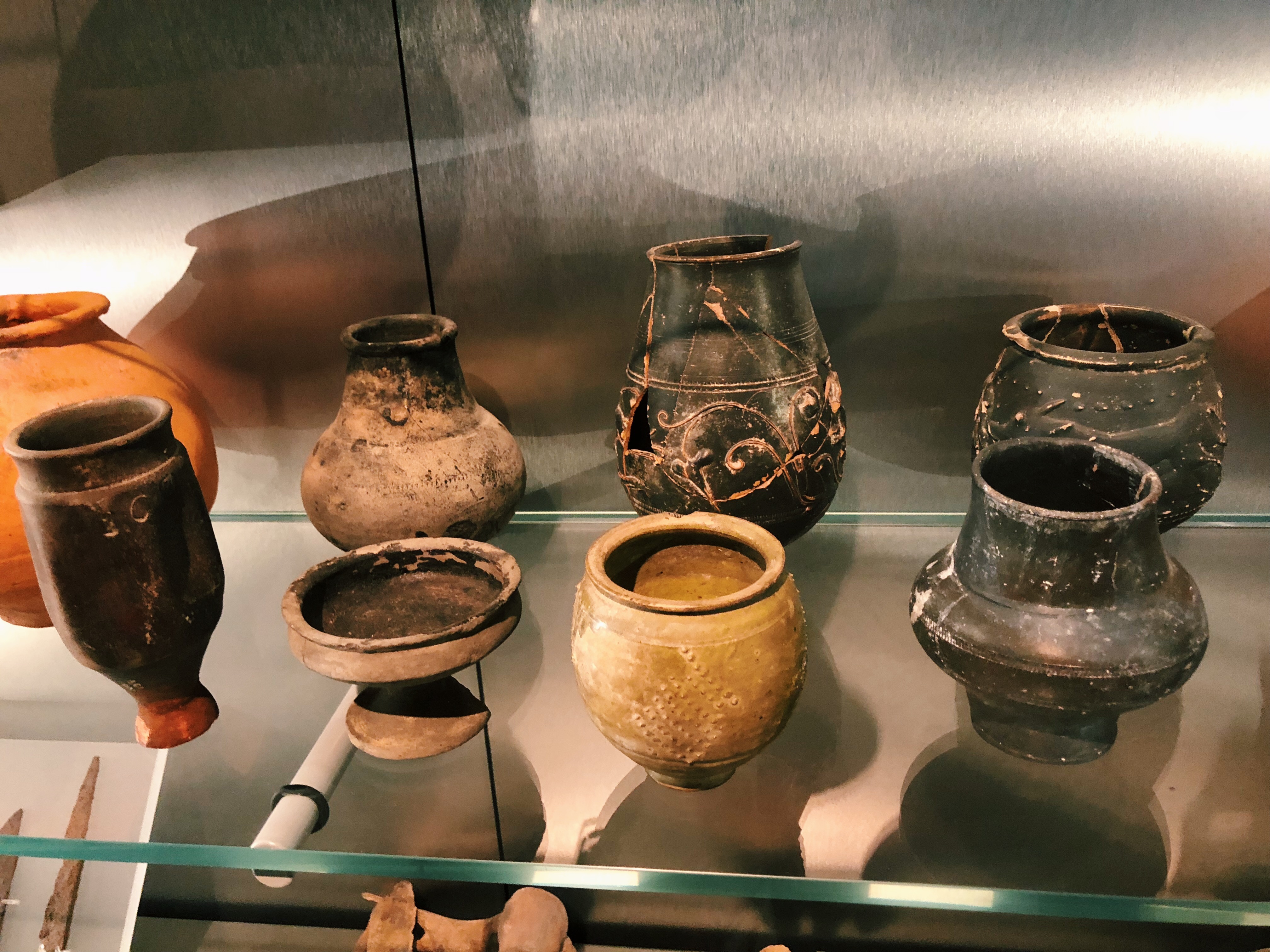 There were lots of objects recovered from the Baths which we found particularly fascinating. It really brings the place to life when you can see real objects from hundreds of years ago. 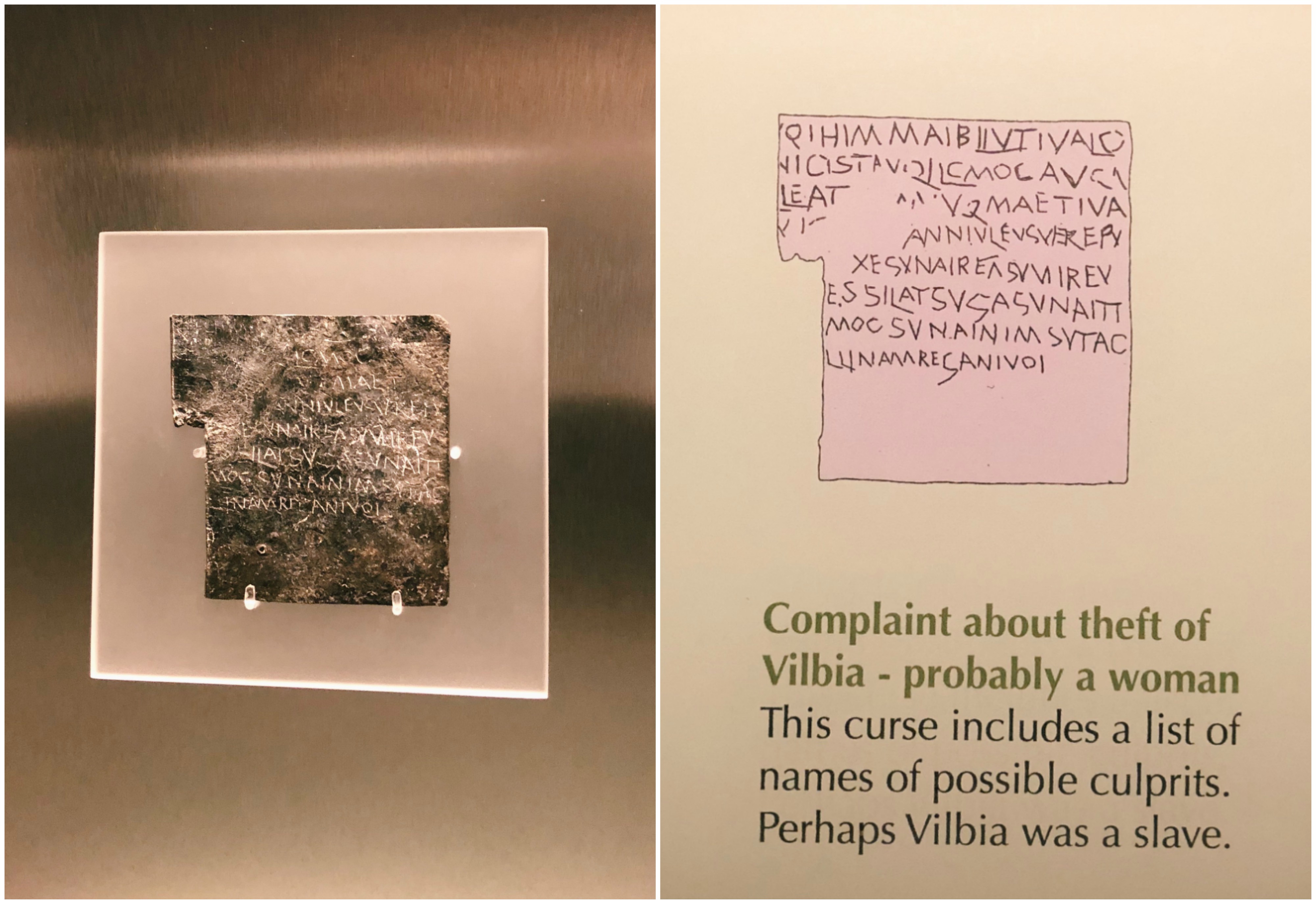 My favourite part of our tour was being able to look at the curses. These were messages written on lead or pewter, before being folded up and thrown into the Spring. It was believed that the spirit of the goddess dwelt within the waters and would hear their messages. 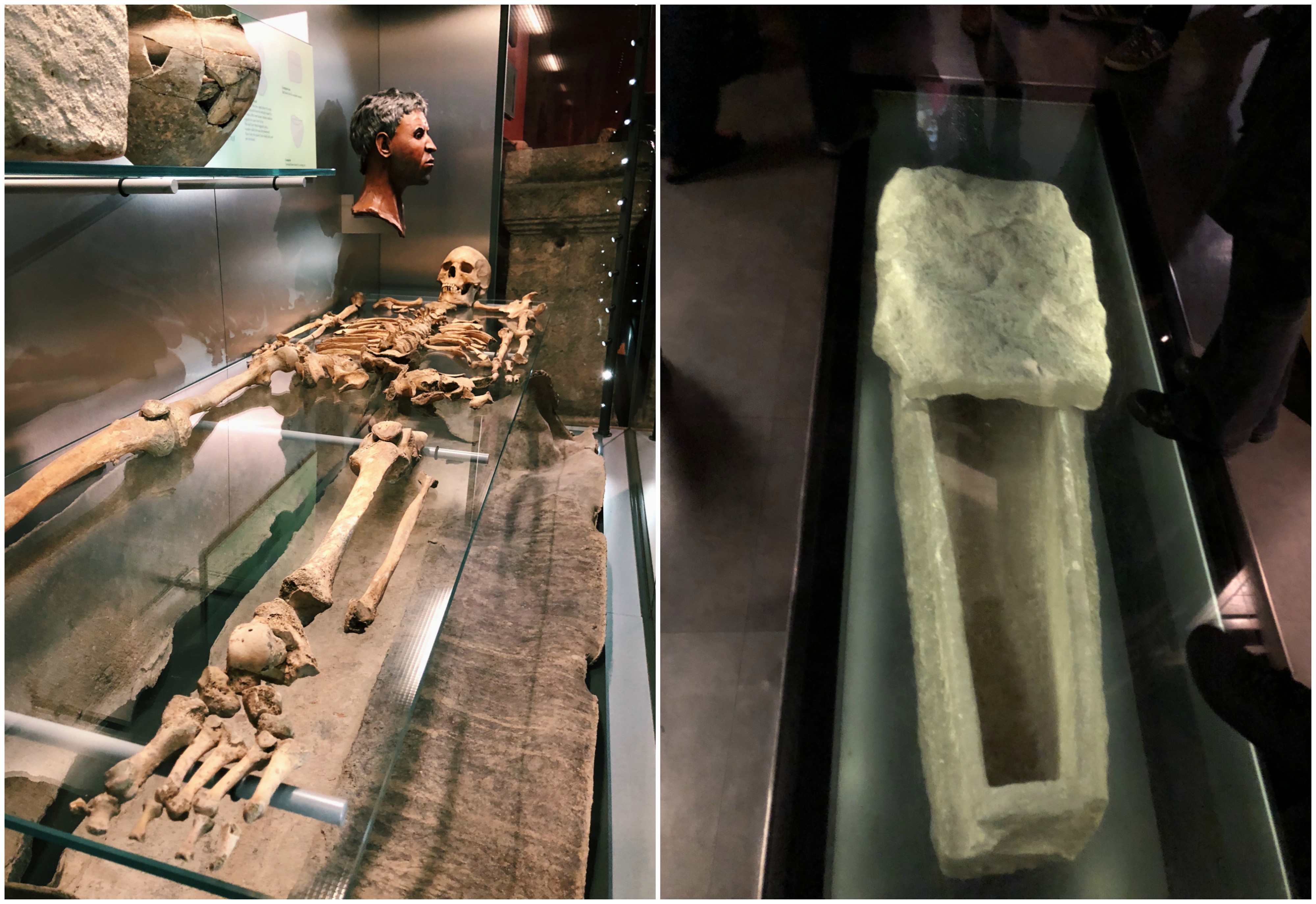 There was even a Roman skeleton in one area of the exhibition, including the coffin too. This was definitely another fascinating reminder that all of this really happened and that these people really existed.

Finally, we got to view the Great Bath up close. The bath is 1.6 metres deep with steps leading down to it on all sides. The niches around the bath were for people to sit on to talk or would have held drinks and snacks. You can sort of see in the back right of the photo, a large flat slab of stone, which is known today as the diving stone. 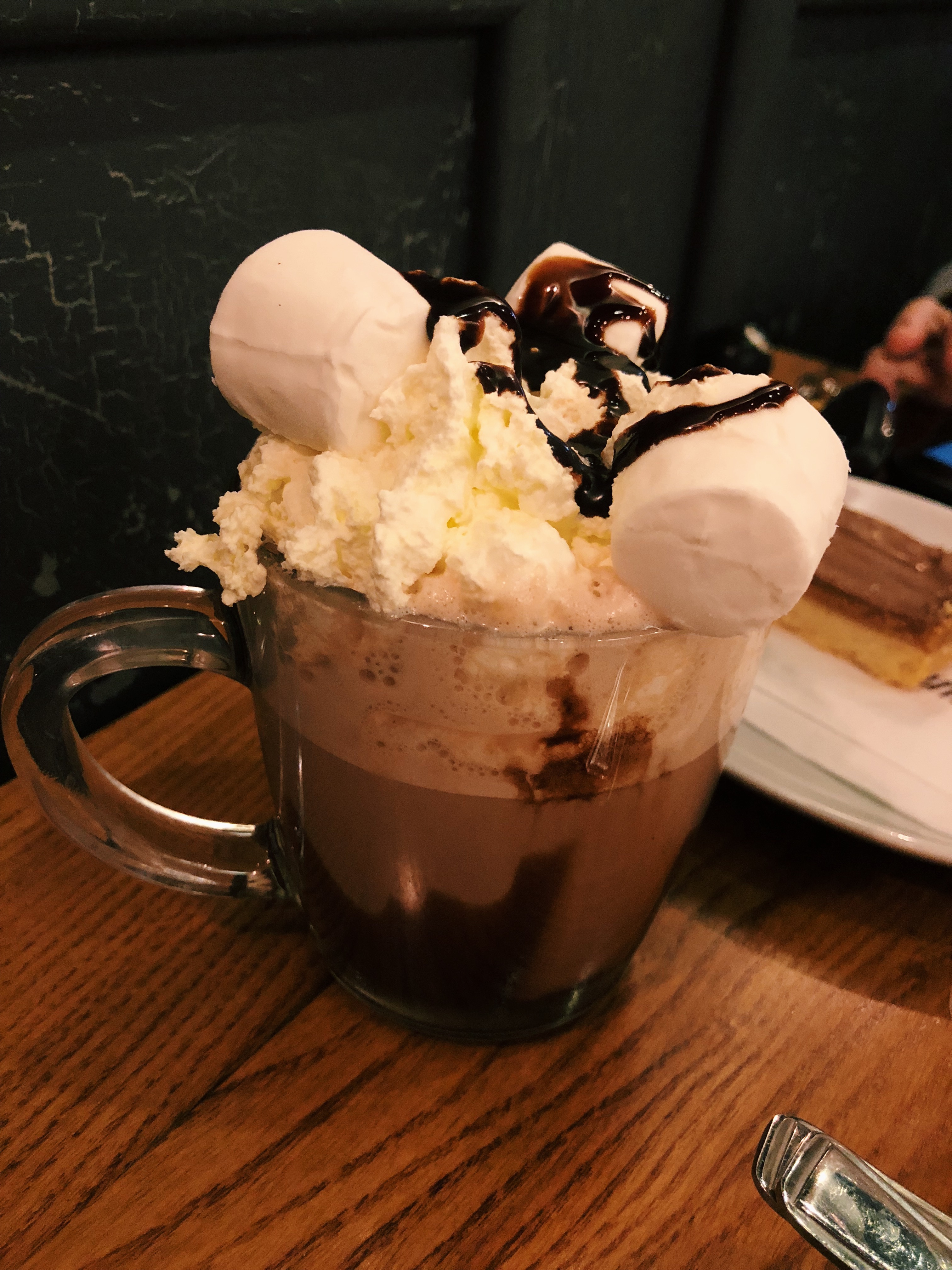 Just before we set off for home, we stopped at a quirky little coffee shop called SOHO coffee. It gave off strong Pret vibes but it had a very different menu. I opted for an avocado caesar baguette and a fruit pot and wait for it… a Rocky Road hot chocolate. This was the best hot chocolate I’ve ever had, generously topped with marshmallows and cream too! I would really recommend stopping by, as it’s a lovely place to sit and watch the world go by whilst recovering from lots of walking and shopping!

I had the best time in Bath, it’s such a beautiful and lively city. It’s brilliant for shopping and also sightseeing which I think makes for the perfect city break. I know I mostly focused on the hotel and The Roman Baths in this post, however the shopping will come later on! I’m saving some things back for other posts to share with you! I would love to know if any of you have visited Bath or if there’s anywhere you would recommend going to stay as we want to go on some more city breaks in 2018!