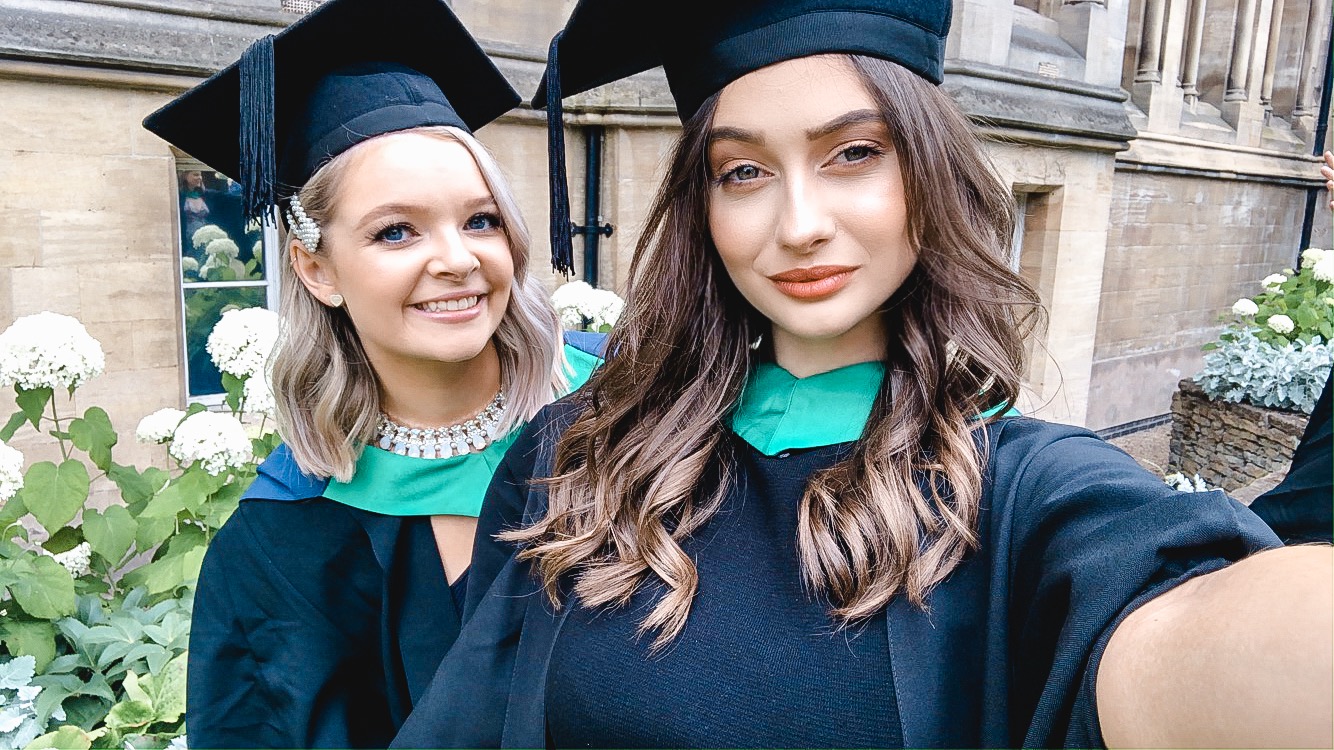 I hope you’re all doing well! I’m still not quite over the fact that I’m officially a graduate now…how on earth did I manage that? I thought it would be a nice idea to document my experience with graduation and ultimately, leaving university life behind.

My final term at university seems like one big panicked blur now, as I look back on it. In total, I had 7 assessments including a presentation, my dissertation (gag) and three exams. Keeping it real here, that period of my life was such a low for me, it was extremely stressful. You know when you’ve been doing something for so long you don’t know what you used to do before that? Eat, sleep, work, repeat! The days kept slipping away and the deadlines loomed closer until finally, it was all go and it was time for the exams. Have you ever come out of an exam totally convinced that you’ve failed? One of mine went so badly that I actually started laughing halfway through it! There was no doubt in my mind that I had completely screwed it up. I remember coming out of university to meet my dad and my best friends and all I could do was cry and panic. I proceeded to get very drunk and tried not to think too much about how I was probably going to be repeating the year again…but apparently I thought wrong!

Weeks later, drunk in the back of a taxi, (classy, I know) I got my results and I had absolutely smashed it! I got a 2:1 in Psychology with Criminology and I had completed my degree. The relief that I felt that night was enough to make me dizzy (that could have been all of the gin too) and I remember crying my eyes out on the phone to my dad at 1am telling him that I would be graduating a few weeks later. I don’t think I’ve ever felt so proud of myself – I was on top of the world!

I woke up feeling sick with nerves for graduation, which is strange when you think about it…we were literally gathering to celebrate our achievements – why were nerves involved? To be honest I think a lot of it was to do with the thought of me tripping over on stage, which thankfully didn’t happen. I’ve actually written about my day over on my pal Becca’s blog if you fancy having a look. So once we’d tottered to campus in our heels, we collected our robes and I had to get that god awful monopoly board of a hat fitted onto my tiny pea head. Speaking of which, I had a spot on my forehead (the kind that deserves it’s own postcode) and so I asked if it could be adjusted a tiny bit so my concealer would not be disturbed. When I said “a tiny bit”, I don’t think they heard as they proceeded to scrape my fringe back and make it look as though I had a five-head. Cheers guys!

Everyone on my course sat together in the University Hall, cheering each other on and getting some last minute mortarboard faffing done. We were ushered row by row to go downstairs before walking on stage to shake hands with the vice chancellor. I panicked so much before I went on stage that instead of saying “thank you” all I could think of was “sorry” which was rather unfortunate but at least it gave us something to laugh about. I did manage to avoid stacking it or wobbling in my heels so I’m pretty chuffed with that! We all went to grab some Prosecco afterwards and said our final goodbyes to some pals and to some of our tutors and lecturers. My favourite part of the day was definitely getting lots of photos with my friends and family – especially trying to explain the concept of a boomerang to my Dad…

Leaving university was bittersweet. On the one hand, I couldn’t wait to get out into the world and leave behind the stress of academic life but on the other hand, it was so sad to say goodbye to a city that I love and a home that I had made my own over the last two years. Despite struggling a lot at university, I’m actually really going to miss student life. I’ll miss my friends and being able to just go to the pub or go for a coffee whenever we wanted. I will definitely miss the spontaneity of everything, random nights out and plans made at the very last minute. I’ll miss living with my boyfriend and seeing him every day, as we’ve been living together for three years now! I’ll miss the hustle and bustle of city life and all of the shops and the restaurants.

It felt like I spent years dreaming of the day I would finally go to university and now, I’m finished with it and I’m back home in my bedroom reflecting upon it all. What now? I know that it’s totally normal to experience feeling a little lost and slightly empty after such a big life change, some even describe it as “post-university depression”. I don’t really know who I am when I’m not in education, working with a timetable towards deadlines. I’ve kind of forgotten how to live like a normal person doing normal things! I’m doing my best to figure it all out slowly and I’m taking each day as it comes. For now, I’m working really hard on my blog and on my social media.

Have you recently graduated? Are you about to start university? Let me know in the comments! I’ve put links to all of my social media down below and I’d love it if you would come and say hi! Also, for those of you that are about to start university or you’re moving into a flat, look no further, I have a post featuring all of the bedroom essentials that you will need!