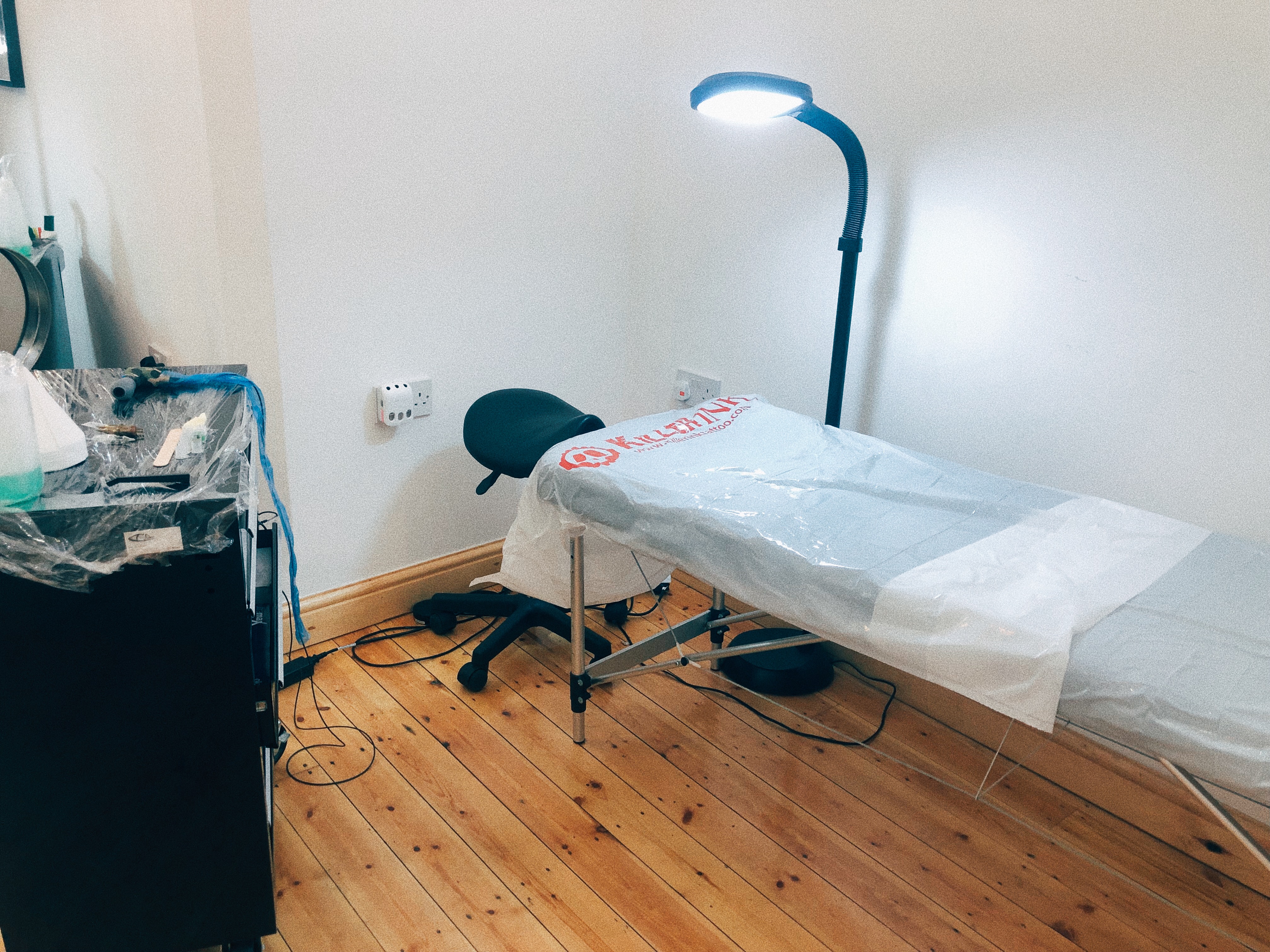 I hope you’re all doing well! In the midst of all of my deadlines and a very important final year at university, I accidentally stumbled into a tattoo parlour and booked in for a two hour session. I think the main thing holding me back, was the unknown. How much will it hurt? What if it goes wrong? What does it feel like? Will they be nice? Can I bring someone with me? I thought I would talk you through the process itself and answer as many of those questions as possible. I hope that this helps those of you that are scared or apprehensive about getting tattoos and for those of you that have been there and done that, I hope you like how mine turned out!

First things first, make sure that your blood sugar levels aren’t low on the day. The most common cause of fainting whilst getting a tattoo is because of the sudden drop in your blood sugar levels. It’s how your body naturally reacts when it feels pain so that is totally normal! My session was booked in for 1 o’clock so I had time for a proper breakfast and then I topped up on some sugary snacks and drinks whilst I was waiting. Once I arrived, my tattoo artist, Magda, sat down with me and showed me the design, which I LOVED! She printed off a few different sized templates for me to choose from and once I had made a decision, she stuck it to my ankle so that I could see where it would sit and how it would look.

I couldn’t figure out what all of the wires and the equipment was for when I first looked at it. It all looked so intimidating and I started to panic a tiny bit. I think that’s natural when you start to see all of the actual tattooing gear.

It was when I saw the bed that my nerves really kicked in. I’m sure lots of you will be thinking what’s all the fuss about, it’s just a tattoo, right? Well it was my first ever experience of getting one and it wasn’t just a small symbol either. With two hours ahead of me, I had absolutely no idea what to expect. I was shaking like a leaf and I couldn’t stop fidgeting! I made the mistake of sending my Dad this photo and he kindly replied “Looks like an operating theatre…” – lovely, thanks Dad? Magda suggested that I should lie on my side so that she could easily access my ankle and my leg and so that I would be comfortable.

I climbed on and lay there shaking (pathetic I know) whilst I clung onto my pal for support – her fingers actually went purple at this point. I asked Magda to count down from three so that I knew when it would begin and so I could see what it felt like before we carried on.

Let’s talk pain. Yep, it hurts. Not all the time, but it does hurt. Some people say it does and some people say it doesn’t – I think it totally depends on where you’re getting the tattoo and the shading that your design requires. The best way that I can describe it is that it’s like a persistent, sharp cat scratch. It’s actually more of an annoyance than anything else. We’re talking claws out, get off me you little shit kind of scratching.

Some parts were more painful than others. For example, the back of my leg was really painful but the front was something I became used to after a while. Like I said, I think it totally depends on the location of your tattoo. The shading was also quite painful but again, it was bearable once I knew what to expect. When it was time for my second tattoo, I was totally fine with it and I was even disappointed when it was all over!

Excuse the blotchiness and the unflattering angle but this was the finished design! When we first moved into our house, my Dad planted a Cherry Blossom tree in our garden. We had a swing set right underneath where the blossom would fall. We used to spend hours in the garden playing on the swings, particularly during the Summer. It was one of our favourite things to do! After Ben died, I knew I wanted a tattoo that represented something that we had together. I wanted something that at first glance, people wouldn’t understand, something unique and personal.

That’s when I knew I wanted Cherry Blossom. One year, whilst we were playing in the garden, we both came face to face with a bee that seemed to be leaking something all over the paving stones. I started screaming that the bee was having a wee and Ben began to howl with laughter (we were only little, hence the toilet humour) and it became one of my favourite and funniest memories!

This one was designed with my mum in mind. Every night before I went to sleep, mum would come into my room and talk to me about my day. If I was anxious or worried about something she would say the following Chinese proverb to me: “Do not fear going forward slowly; fear only to stand still.”. The words clicked with me and they began to really mean something as I got older and was able to grasp the literal meaning behind it. It continues to shape me today and it has been the most soothing of thoughts at some of the hardest times in my life.

I thought the best symbol to represent these words was a semi-colon: not quite a full-stop but a pause before continuing. I’ve been struggling with chronic anxiety and depression since childhood. There have been times when it’s been manageable and there have been times when it’s just unbearable but it’s been a huge part of my life for many years. The one thing that has remained consistent is the support from my mum. I knew that the semi-colon was also a symbol for mental health so it all began to click into place from there! Mum has always loved painting in watercolour, so I wanted to incorporate that with the proverb that she has always told me.

*UPDATE – I returned for my touch-up and I asked for a couple of small changes. Don’t get me wrong, my original tattoo was beautiful and I was really happy with it but once it had healed and I had gotten over the initial excitement of it all, I realised it wasn’t quite what I had envisioned. I had a chat with my tattoo artist and she was more than happy to include these changes in my free touch-up! I explained that I wanted something that looked like a watercolour painting, much softer and almost like you could see the water splashes and where the paint had bled. After an hour, I basically had the tattoo that I had always dreamed of.

If you compare the pictures, you’ll see how much it has changed. There’s so much more detail and the whole thing looks softer and more delicate. Moral of the story is, if you have ANY doubts about a tattoo that you’ve had done, say something! Even if you’re worried about it being an awkward conversation (a professional wouldn’t allow that anyway), it’s on you for life so it’s more than worth it just to make sure you’re happy.

Do you have any tattoos? Are you planning on getting one? Do you have any questions? Let me know in the comments! Don’t forget to follow me on my social media – come and say hey!